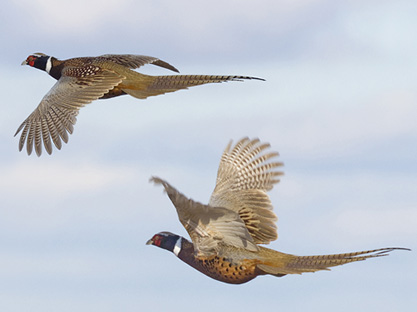 Chinese Ring-necked Pheasant were brought to Oregon in 1881, 1882 and again in 1884 when poplulations were established there and in neighboring states. In the late 1800’s and early 1900’s birds imported from English gamebird farms were released across the US with the foundation of most wild pheasant populations in the U.S. deriving from those importations.

Western New York state once supported a healthy pheasant population, especially in the fertile lands along the Lake Plains. The birds, dependent on habitat of undisturbed grasslands in an agricultural landscape adapted well to this area. Today most wild birds left in New York are still found in that area though the population is down significantly from where it was prior to the 70s. As with other wild game birds, contemporary farming practices have degraded prime habitats for pheasants, replacing small, diversified farms with large monocultures. Through conservation efforts, management strategies have helped conserve and restore habitat for Ring-necked Pheasants around the country, particularly on the prairies.

The male Ring-necked Pheasant is immediately recognized by his spectacular multicolored plumage and long tail; the hen, drab in comparison, is light brown overall marked with black. Both are swift runners and strong short-distance flyers. They are found in areas with grassy field borders, wetlands, and numerous small patches of idle land with tall grass, forbs, and lesser amounts of brush and trees.

Cock birds establish breeding grounds in early spring and maintain sovereignty over their areas by crowing and calling, sometimes resort to physical combat that is rarely fatal. Hens assemble in breeding groups generally focused on a single male who courts them by strutting or running; spreading his tail feathers and the wing closest to her while erecting his red eye wattles and the feather-tufts behind his ears.

Hens choose the nest sites, using a natural depression or hollowing one out, gathering grasses, leaves, stalks, twigs, corn husks, and their breast feathers to line their ground nests built hidden in tall grasses. She lays from 7-15 eggs and has one or two broods. 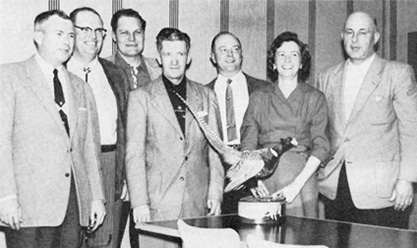 VIPs at the drawing including AFTCA secretary Leslie Anderson

The November 9, 1957 issue of the American Field contained an AFTCA announcement by then secretary Leslie Anderson. “Field trialers will recall that the board of trustees of the Amateur Field Trial Clubs of America, at the annual meeting in Orange, Va., during March, 1957, authorized establishment of a National Amateur Pheasant Shooting Dog Championship, to be a sort of sister stake to the National Amateur Shooting Dog Championship which has been run on quail for several years.” The enthusiasm for this new amateur championship reflected the keen interest of ringneck fans across the country.

The inaugural running was over the Delaware Wildlife Refuge in Central Ohio beginning March 22, 1958. With the complete cooperation of the Ohio Game Department, a group of sportsman had developed a field trial area without peer. The grounds were beautifully groomed, had plentiful game and offered excellent accommodations nearby. Perry E. Gray of Hillsdale, Michigan was chairman of the Grounds Committee, and secretary Leslie Anderson of Hernando, Mississippi was on hand throughout. Hard working members of the committee and of the Central Ohio Bird Dog Club were given credit for the successful running of the inaugural event. The Central Ohio Bird Dog Club donated a beautifully mounted pheasant, shot in the area, to the winner.

The National Amateur Pheasant Shooting Dog Championship ran on the Delaware grounds through 1960, the following year moving to the excellent pheasant grounds, Three Rivers Wildlife Managment Area near Baldwinsville, New York where it continued to receive tremendous support. In 1964, the championship was conducted in Biggs, California, in 1966, with support from the Pennsylvannia Game Commission in Allenwood, PA and many years later on the well-known grounds at Harpster, Ohio along with a slate of other ringneck championships. In 2011 the National Amateur Pheasant Shooting Dog Championship moved west where an able body of field trialers, Region 14’s Big Sky Field Trial Club has successfully hosted the championship at Circle, Montana to the present. 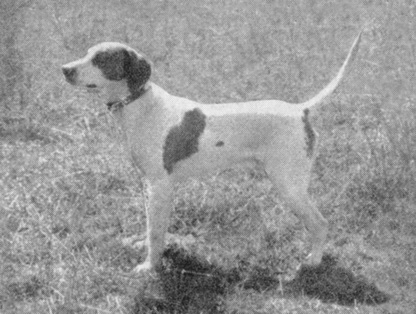 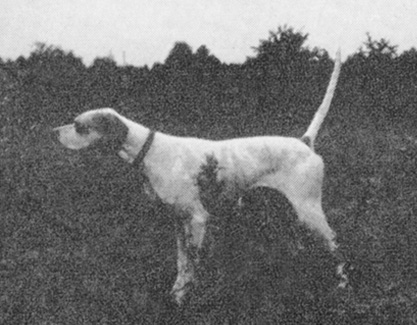 Little Bob, 5-year-old white and orange pointer male, winner of the inaugural event, was no stranger to field trial laurels having previously won puppy and derby stakes, the Central States Amateur Championship Region 4 two years prior as well as shooting dog stakes. He was bred by his owner, L. D. Puckett of Anderson, Indiana who piloted him to this triumph, his 13th placement. A sound bird dog, Bob displayed the ability to run fast and wide but also to hunt close for game when required. His handling response entirely satisfactory, he scored two meritorious pheasant finds as well as a bevy of quail, evidence of his versatility.

The Runner-Up, Parker’s Spunky Queen also has a long list of placements concentrated in shooting dog stakes. The white and lemon pointer female, whelped May 1952, was bred by A. Ray Dahl of Pontiac, Michigan. Her former owner, H. R. Parker of Detroit piloted her to this her 20th win. Her ownership was transferred to John Wall of Birmingham, Michigan in 1956. She had a fine piece of pheasant work involving several birds as well a find on quail to cinch the Runner-Up title.

Setter female, Doc’s Highland Beau handled by her owner Dr. G. L. Morris, Hillsdale, Ohio, was mentioned in the report as closest to the winners with three game contacts and a commendable race.

Chris Mathan
Thanks to Mike Husenits for providing information about this championship.