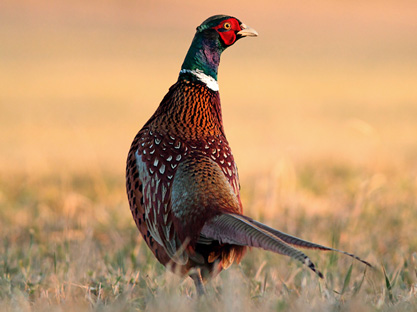 Ring-necked Pheasant
Chinese Ring-necked Pheasant were brought to Oregon in 1881, 1882 and again in 1884 after which populations were established there and in neighboring states. In the late 1800s and early 1900s birds imported from English game bird farms were released across the US with the foundation of most wild pheasant populations in the U.S. deriving from those importations.

Western New York state once supported a healthy pheasant population, especially in the fertile lands along the Lake Plains. The birds, dependent on habitat of undisturbed grasslands in an agricultural landscape adapted well to this area. Today most wild pheasants left in New York are still found in that area though the population is down significantly from where it was prior to the 1970s. As with other wild game birds, contemporary farming practices have degraded prime habitats for pheasants, replacing small, diversified farms with large monocultures. Through conservation efforts, management strategies have helped restore and conserve habitat for Ring-necked Pheasants around the country, particularly in the mid-western prairie states.

The male Ring-necked Pheasant is immediately recognized by his spectacular multicolored plumage and long tail; the hen, drab in comparison, is light brown overall marked with black. Both are swift runners and strong short-distance flyers. They are found in areas with grassy field borders, wetlands, and numerous small patches of idle land with tall grass, forbs, and lesser amounts of brush and trees.

Cock birds establish breeding grounds in early spring and maintain sovereignty over their areas by crowing and calling, sometimes resorting to physical combat that is rarely fatal. Hens assemble in breeding groups generally focused on a single male which courts them by strutting or running; spreading his tail feathers and the wing closest to her while erecting his red eye wattles and the feather-tufts behind his ears.

Hens choose the nest sites, using a natural depression or hollowing one out, gathering grasses, leaves, stalks, twigs, corn husks, and their breast feathers to line their ground nests built hidden in tall grasses. She lays from 7-15 eggs and has 1 or 2 broods. 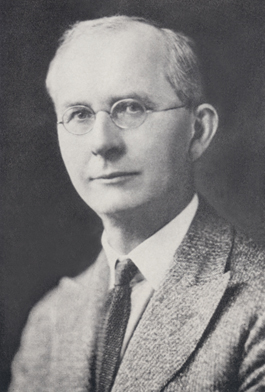 The 1933 inaugural running of what was then named the “Amateur Pheasant Dog Championship” was held on the pheasant terrain near Lakeport, NY on the shores of Onieda Lake, about 15 miles from the town of Oneida which served as trial headquarters. The trial ran from October 16 -18.

The championship was established 15 years after the first amateur championship (today’s National Amateur Quail Championship) which proved to be successful and extremely popular. Reporter A. F. Hochwalt stated, “To be a member of the association (AFTCA) adds distinction to any club and quality dogs for the annual competition in the quail championship has been the ambition of every amateur who owns a bird dog. What then is more natural than to broaden the sphere of the association?”

Pheasants, by then, had become a popular game bird amongst hunters and field trialers alike and a “fixed institution in the scheme of breeding bird dogs.”

Dr. P. K. Phillips, secretary of the association (Amateur Field Trial Clubs of America) at the time, had the conviction and foresight to bring the event into being and took the necessary steps toward inaugurating a stake that would mean the same to amateur pheasant dog enthusiasts as those devoted to the quail dog. The project was approved at the annual meeting of the club in February with committees appointed to determine date and place with the Lakeport, NY grounds selected.

From that area the championship moved further west to grounds near Buffalo, N.Y. until 1941 when with the exception of 1942-45-46 (Buffalo) it was run in Cranbury, N J until 1952 under the management of Dr. Alvin H. Nitchman. In 1953, it was hosted at Indiantown Gap, PA; the following year moving to Woodland, CA. In 1955, the National Amateur Pheasant Championship moved to Baldwinsville, NY where it ran until 1963, then moving to the famous Killdeer Plains near Harpster, OH where it was contested until 2009. The championship once again sought a new venue when the state-owned and managed Killdeer Plains became unavailable for field trials moving roughly 100 miles to the southeast to the Tri-Valley grounds near Zanesville, OH where it runs at present. For many years the championship has run in conjunction with the International and Open Pheasant Championships and Pheasant Futurity. 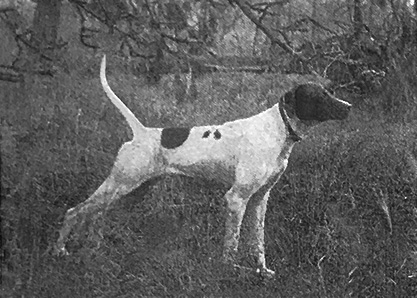 Hochwalt describes her performance: “Rumson Farm Queen, proud winner of this first title of Amateur Pheasant Dog Champion, is not unknown to the bird dog public. Indeed she has gained laurels in various spheres, on quail as well as on pheasants. Whelped February 8, 1927, she is a product of the Rumson Farm Kennels, of which Raymond Hoagland is the owner. As a bird dog she has always been reliable and that is what has won her places. She did not show a high degree of speed here, but she hunted every inch of her country with the judgement of an experienced dog. On point is where she displays her real sparkle and flash. To see her point and to observe the finish of the technique is enough to make one carry her in mind. No doubt there were more brilliant dogs in that stake which under other circumstances might have beaten her, but on this occasion her one find and subsequent perfect performance were enough to gain recognition.”