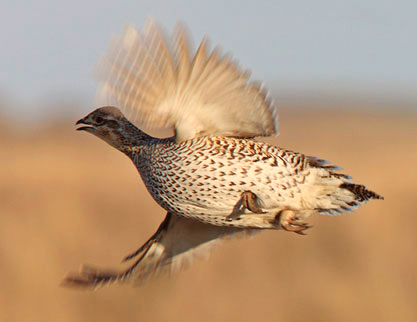 Sharp-tailed Grouse
Native to North America, the Sharp-tailed Grouse (Tympanuchus phasianellus) is a medium sized grouse with a round body, short legs and elongated central tail feathers that create a sharp point. The bird’s upperparts are barred with dark brown, black and buff coloring. Both the male and female sharp-tailed grouse have a crescent-shaped, light orange comb over each eye. Although similar in appearance to the Greater Prairie Chicken (Tympanuchus cupido), the Sharp-tailed Grouse can be distinguished by the dark V-shaped marks on the underparts, the elongated central tail feathers, and the color of the air sacs in the male.

Primarily a ground forager, Sharp-tailed Grouse feed on a range of foods, with their diet varying depending on location and season. In spring and summer, it consists mainly of grasses, fruits, flowers and insects. Buds, seeds, plant matter and fruit are eaten during the winter months.

The male Sharp-tailed Grouse gather at lek sites in spring to perform spectacular courtship dances to attract females, and in autumn to re-establish their territories and dominance hierarchies. After mating, the female constructs a nest made of plant material and breast feathers often under small shrubs or trees. The male does not take part in nest building or raising the young. The female usually lays up to 12 eggs that are incubated for 21 to 23 days. The well developed chicks leave the nest a short time after hatching to forage with their mother. She usually raises only one brood per year but a second breeding sometimes takes place if the first brood of chicks is lost. The birds roost on the ground or in trees and may burrow beneath the snow in winter. A non-migratory bird, the Sharp-tailed Grouse’s flights are generally less than a 100 yards.

“Chickens” are highly social and form flocks of up to 30 individuals. In late summer months they are perfect for training young bird dogs as the birds rarily flush all at one time, allowing for the dogs to make errors, be corrected and then immediately be praised for remaining steady on the rest of the birds as they flush. As the season progresses and colder temperatures arrive on the prairie, the birds become more flightly and difficult to get pointed. 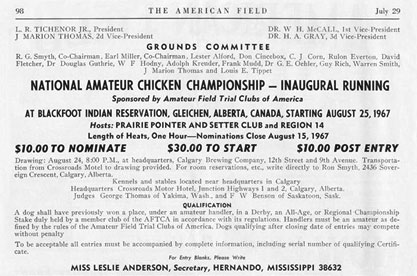 The June 10, 1967 issue of the American Field held the announcement of the inaugural running of the National Amateur Chicken Championship penned by Ron Smyth of Calgary, Alberta. “A new spectacular is on the AFTCA agenda. The initial running of the National Amateur Chicken Championship will be held near Calgary, Alberta, starting August 25. Make your plans now.” Ron goes on to say, “Professionals and amateurs alike have long journeyed to these Western plains in search of chicken for as it is well known, the young bird and the vast expanse of the prairie is unequalled in developing pointer and setter prospects.”

For most of the next 18 years the championship was hosted by the Prairie Pointer and Setter Club and held on the Blackfoot Indian Reserve near Gleichen, Alberta. Towards the end of that period, the Western Canada Amateur Championship Association representing all Region 14 field trial clubs took over the operations of the trial. Member clubs voted for a change of venue and beginning in 1985, the championship ran on the historic Mortlach grounds in Saskatchewan. This marked the first time a major amateur championship was held on these grounds. Professional trainer Leon Covington trained in the area in the 1940s and with the demise of the Saskatoon Dog Club, which had operated prairie trials for many years, he started the Saskatchewan Open Championship in 1967. With Cov’s permission and help, members of the Saskatchewan Amateur Association began to use the grounds for training, fun trials and finally recognized events. Mortlach to this day has a special recognition among field trialers for its openness and most first-timers are bound to remark, “there’s no place to hide, a dog just has to get out there and run.” The first year at Mortlach, the National Amateur Chicken Championship drew 44 pointers and 2 setters and was won by Pete Frierson’s great pointer Addition’s Go Boy, with Rebel Cause awarded Runner-Up laurels for owner/handler Stephen Harwood. 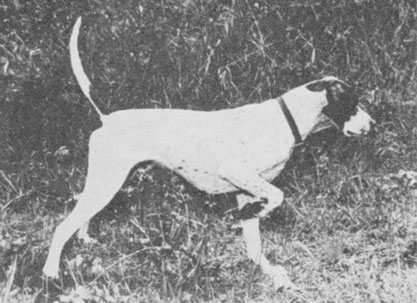 The inaugural National Amateur Chicken Championship was held on the Blackfoot Indian Reserve near Gleichen, Alberta. 12 pointers and 4 setters competed. Happy’s War Bonnet (Yakima’s Happy Time x War Storm’s Bonnie) was declared champion with no runner-up named. Handled by co-owner, R. F. Hester, the report of the winner read as follows: “Happy’s War Bonnet is no stranger to the Championship Circle, having garnered the National Chukar Shooting Dog Championship and being named runner-up in the National Chukar Championship this spring. He reflects the many hours of work spent by his handler. Raised by R. F. Hester since puppyhood, there has not been a day passed that work of some kind was not fosterd on him. The dog apparently broke himself and was staunch enough and showed enough hunting instinct to win a Derby event while only 4 1/2 months old. Brought up to the prairies by Clyde Queen, personable trainer from California, and conditioned and polished to a fine edge by Clyde for this Championship, Bonnet looked the part all the way. Running in the heat of the day, he showed a pleasant, forward race, often to the edges, was scouted on several occasions but always returned to the front and put on a display of bird finding and handling that will long be remembered by viewers.”