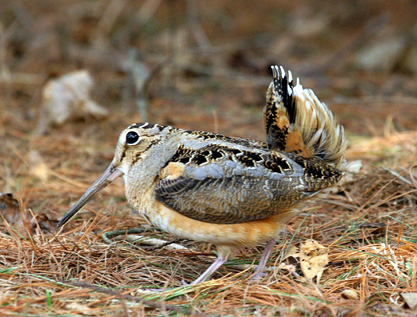 A migratory bird, the American Woodcock’s primary breeding range is southeastern Canada, Maine and the Great Lakes region, dropping down as far as central West Virginia. The woodcock’s wintering range includes all the southeastern states as well as Arkansas and Texas.

About the size of a robin, the woodcock’s long, thin bill is used to probe rich soils for earthworms which make up about 60% of their diet, with numerous other insects providing the rest. Their dietary requirements, in part, determine their habitat needs of dense, moist young forestland, preferably along field edges that provide cover as well as the singing grounds for the males to perform their flight song and ground display to attract females. Males may mate with several females and play no role in incubation or rearing of juveniles. The female lays her clutch of four eggs in a slight depression on the ground among dead leaves. The incubation period is 19 – 22 days with eggs hatching from early April until mid-June. The chicks leave the nest within hours of hatching though they remain with the hen. They grow rapidly on a high protein diet of worms and insects, are strong flyers by four weeks and are independent by six to eight weeks of age.

Woodcock migrate at low altitudes of about 50 feet, traveling at night and resting and feeding in secluded thickets during the day. The birds may travel alone or in loose flocks called “flights.” Migration usually peaks in late October and early November with cold autumn nights and strong northwest winds often push large numbers of woodcock south.

The greatest threat to woodcock has been the rapid decrease of suitable habitat for feeding, breeding, nesting and needed layover areas during migration. Much study and effort is being conducted by conservation organizations to try to improve conditions for the survival of this well-loved bird.

In the early 1970s the University of New Brunswick was conducting a woodcock habitat study that I was involved in. One of the areas where the study was conducted, the Mazerolle Settlement, was just north of the Fredericton campus.

I had two passions back then, woodcock and bird dogs. Through some of the local field trial community, people like Harold Hatfield, Dave Palmer, Ron Ashfield, Andy Wishart, and several others, we decided to put on the first New Brunswick Woodcock Classic.

There were no courses but since I’d been running a trap line for woodcock all year we turned the first brace loose with the second on leashes and “hunted” the country.

The classic ran for several years with support from not only the New Brunswick crew but such stalwarts as Al Pilon, Bob Paucek, Warren Sims, Bernie Murray, and many others from the New England Field Trial community.

Having fulfilled the AFTCA stringent requirements, the first International Amateur Woodcock Championship hosted by the New Brunswick Field Trial Association was held in October of 1977. It was conducted on the Mazerolle Settlement and adjoining lands where three one-hour courses were laid out with a fourth course on Crown property located about eight miles to the southwest. An official tally of 162 woodcock and 21 grouse were counted as opportunities afforded the dogs during the trial.

As with all wild bird grounds, the Mazerolle began to go by and it was then that the championship moved further north to Debec, New Brunswick and ran on land owned by Harold and Andy.

To this day, even though Harold and Andy are no longer with us, one of the most beloved amateur championships continues with the help of the stalwarts like Keith Burgess. 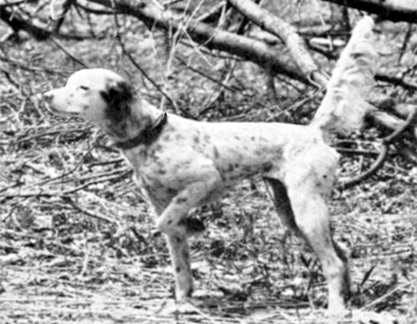 The inaugural running of the International Amateur Woodcock Championship held near Fredericton, New Brunswick, started on October 8, 1977 and drew 12 Pointers, 24 Setters and 1 Brittany. The judges were Dr. Thomas M. Flanagan and Basil G. Hawkins. The winner was 2 1/2 year old Setter female Ghost Star (Ghost Train x Hy Kaliber Tiny) owned by T. O. Shermoe and handled by Bryant Shermoe. Though other contenders are described in the report by Al Pilon, no runner-up was named. Perhaps, the judges felt no dog came close to the stunning performance of the winner.