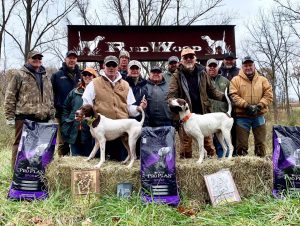 The Redwood Farm is the perfect place to show a walking shooting dog with rolling hills, edges, feed strips and plenty of cover that gives the opportunity for dogs to make moves while staying completely in tune with the handler.  Most importantly there was no shortage of birds as every brace had bird contact with many having multiple covey finds. The field was filled with tough competition full of numerous champions and many that will have their day soon enough. The Wrights are by far and away the best hosts of any field trial I’ve ever attended and from the feedback received I don’t think I was alone in that belief. Thank you to each and every handler who traveled from all over to make this a great Championship.

Indiana sure put on a show with the weather we had Sun, Wind, Rain, Snow, Sleet, and a mix of everything. Multiple dogs finished the hour but the champion and runner-up champion gave the judges exactly what they were looking for in a Champion.

Our Champion “Justice” came from the final 16th brace and after his brace mate was picked up for failing to stop to flush he had the course to himself. His application was big at times but he shortened up when the course called for it while always in tune with his handler. During his hour he had 3 pieces of bird work (31, 38, 50) which he handled flawlessly.

7a Beaucoup Creek Buck/SM/Heisner – Find at 8 and moved forward, picked up

10a Bullfrogs Happy Patch/PF/Jeremiah Feider – Finds at 10, 20 and 35 dog moved forward and was picked up

No field trial is complete without a great team of workers. This year’s championship was no exception. I would like to personally thank Keith & Jessica Wright, John & Jill Wright, CJ Campbell, and Shannon St. John for all their help. Keith rode every single brace and helped each handler navigate the course, CJ and Shannon shared dog wagon duties over the weekend and were always there when we needed them, Jessica, John, and Jill provided top notch hospitality and made sure meals were ready. There is one guarantee if you ever get the chance to run a trial at Redwood and that is you will NOT leave hungry! The Redwood team made sure we were well fed all weekend with breakfast, lunches, and dinners each day! Our Purina dinner Friday night was a ribeye steak dinner from the Beef house Restaurant in Covington, IN.

We want to thank the judges who took time out of their busy schedules to come and watch this great field of dogs while giving their utmost attention to each and every dog over the weekend…Jim Lawless from Sparta, IL and Bill Elliot from Harvard, IL.

We’d like to also thank our sponsors for their continued support, Purina and Garmin provided dog food and collars for our Champion and Runner Up Champion.