The 2021 AFTCA National Amateur Chukar Shooting Dog Championship was co-hosted this year by the Bay Area Bird Dog Club (BABDC) and Region 11 of the AFTCA. This amateur championship stake is run annually, and alternates between Regions 9, 10, and 11 respectively; being run at either Prairie Wind Ranch, near Payette, Idaho (Region 9), Imperial River Cattle Ranch, near Maupin, Oregon, (Region 10), or the BLM field trial grounds at Red Rock, Reno, Nevada (Region 11). All three of these venues are located in mountainous high desert terrain where chukar can be found. This year, as in the past, liberated chukar supplemented the native gamebird population.

The drawing for the amateur chukar stake was held in conjunction with that of the Western Championships on the field trial grounds at Red Rock, Friday evening, April 16. Twenty-three entrants were drawn for the stake; 19 pointers and 4 setters. The running began on the morning of Saturday, April 17, and concluded on the following Sunday afternoon. Weather during the running was cool in the mornings and warm in the afternoons; a steady breeze blowing most of each day, with afternoon gusts to 25 mph. Warm weather during the entire stake made scenting conditions tough and birdwork was a premium.

Judging the stake were Joe Gower of Newcastle, CA, and Jarry Walton of Reno, NV. Both men have trained and campaigned their own dogs in amateur and open competition, have an eye for a stylish birddog, and have a good number of judging assignments under their belts. We appreciate their time in the saddle; their decision was well received.

In separating the two, the focus was primarily on consistency in application, range, and style in birdwork. Of the two dogs, Toad hit the standard more consistently and showed at range which used up more of the country than Maybellene. Both dogs stood mannerly, showed style,  and were motionless on their birds; the champion having one more find than the runner-up.

Painted Owyhee Sagebrush (B. Ledington) and Love Train (Griffin) were off from camp in the first brace of the stake reaching forward quickly in their race through the lower basin. Both dogs were through the junipers at good range and into the big grassy basin where they were consistently forward and meeting the standard. Through the buttonhook both dogs showed nicely when at 45 Sage was seen pointed, all was in order at flush and shot. Through the ravine both were forward into the rocks where they hunted nicely. Sage finished a bit short, Love Train made some big moves and was not handy at time.

*Painted Molly (J. Ledington) and Elhew See Me Charm’m (Schaaf) cast off from the steel tank towards the gate, and were into the rocks at moderate range. From cast-off Molly was not showing her usual snap. At Brittany Road Charm’m was showing nicely moving to the front on the contour. Molly was picked up at 20 near the water trough between the junipers. For the rest of the hour Charm’m showed at moderate range and finished his hour birdless. (*A few days after the trial a large mass was found on Molly’s liver and she was put to rest)

Tucalota’s Rebel Rush (Mayhew) and SB Always’s Dreamin (Owen) were off above the water tank heading toward the south face. Both had an initial lapse in contact with Dreamin making a couple big moves. Rush had a find in the rocks with high head and tail at 20, all in order. For the remainder of the the brace both dogs showed at moderate range, and finished fairly handy.

Indian Head Whiski (Tappero) and Painted Owyhee Breeze (B. Ledington) started their hour at the horse trough. The first ten minutes Whiski was fairly handy and then started to widen his race. Breeze was big and forward from the start. At the back meadow both Whiski and Breeze were to the front with Breeze pushing the standard. Whiski went hard right in the antelope draw and had a short lapse in contact, coming from behind to regain the front. Both were picked up at 30 in the basin above camp.

Far West Builders Ace (Wilkin) and Skydancers Gold Rush (Griffin) started their hour forward and showing to the front nicely. Ace got under a bird at 10 and was harnessed. From the bottom of the grassy basin through the buttonhook, Rush was forward and snappy. At Brittany Road, Rush was feeling the heat and had shortened up a bit. Rush finished the hour birdless in the rocks.

Lone Tree Splish Splash (Owen) and MH Rockford Peach (Huston) started the hour at the galvanized tank. Both were fast and forward through the gate and into the rocks; Splish Splash with a stylish find at 5 in the lower rock piles. Through the big ravine Peach spun and stacked-up nicely just below Brittany Road with high head and tail, pivoting slightly at the flush and shot. From Brittany road through the junipers both dogs were forward and stylish on the ground. At the bottom of the big pasture both dogs were found standing at 30, Peach taking a back; all was in order at the shot. Past the hawks nest and into the buttonhook both dogs showed at nice range. Time was called near the junipers with both dogs needing to be dug up. Point was called after time for Peach, then waved off.

Touch’s California Dream (Griffin) and Indian Head Intrigue (Tappero) were first off from camp Sunday morning. To the junipers and into the big pasture both dogs were forward and at nice range. Intrigue hit some locations other dogs hadn’t and made a couple wide swings which needed some scouting. At time the tracker was requested for her recovery. Dream finished his hour with one stylish find and a barren stand.

Tucalota’s Rebel Buck (Mayhew) and Got A Little Project (Schaaf) were away from Brittany Road, through the deep ravine and into the rocks in short order. At 10 Buck was found standing, and at the flush left with the birds. Project was picked up around 40; his race that day not pleasing his handler.

Far West Climate Change (Boyd) was scratched. Painted Owyhee Toad (B. Ledington) came down from brace 12 to run with Skydancers Deal Maker (Griffin). Cast off from the horse trough both dogs were through the junipers and into the big pasture in short order. Both ran at moderate range through the buttonhook, then Toad started reaching out. After a short lapse in contact Toad was found standing stylishly at 30 near the junipers, all in order at flush and shot. At 50 in the lower rocks Toad was again found standing with high head and tail, the pointer steady as his birds lifted. Both dogs finished to the front in the rockpiles after the gate.

Maybellene (Griffin) and Tucalota’s Rebel Touch (Mayhew) left the galvanized tank and were through the gate at moderate range. Touch was a little lateral through the rocks, Maybellene more forward. Through the rocks and on to the junipers both dogs were a moderate range. At 22 Maybellene was found standing on the edge of the bluff, all in order at flush and shot. Maybellene made a nice move near the antelope draw and continued forward over the top. Mayhew pulled the tracker for Touch at 55. Maybellene finished her hour to the front near the top of the junipers above the edge of the big pasture.

Twer’s Heartbreak Ridge (Schaaf) and Northwoods Charles (Owen) began their brace from camp after lunch Sunday afternoon. Both Ridge and Charles making nice moves from cast off; both stylish in their application. Charles had a slight lapse in contact after entering the junipers and was recovered at the top of the big pasture. Both dogs were watered at the back tank. At 20 Charles stopped-to-flush at the antelope pasture, all was in order for the shot. Owen requested the tracker at 40 for Charles. Ridge had a nice forward race, but finished his hour birdless in the rocks.

Each year the Bay Area Bird Dog Club co-hosts an Amateur Championship stake which is run prior to the Western Championships. In past years the amateur stakes have proven to be very well-attended, with competitors coming from any of five western Regions to compete, and some folks from further east.  This year was no different.  We appreciate the commitment of these folks, and the willingness to travel such great distances to compete.  The BABDC would also like to thank the committed Region 11 trialers which join us at the end of the season every year to make this such a great trial.

It must also be noted that without the sponsorship provided by Garmin and Nestle-Purina, the stake would not be what it is. We thank them for generously providing high quality feed and training products for our winners. The Western Village again gave field trialer’s bargain rates. We are fortunate to have this continued support from our sponsors and hosts.

Thanks to Brad Laverne for his work as dog truck driver and go-to guy, and to Lori Steinshouer for providing a source of water to fill our horse troughs and dog tanks.  And thanks to George Gover, Bridget Ledington, Rich Heaton, Mike Wilkin, Bill Owen, and Hunter Grundmeyer for all their help around camp and on the course. 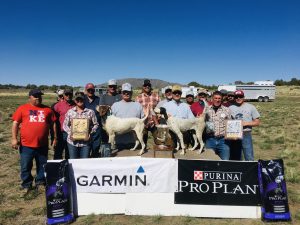