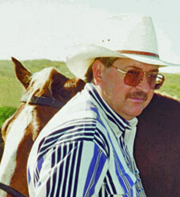 As the field trial year draws to an end, I hope that it has been enjoyable on many levels and successful on a personal level.

As a commodity broker and speculator for 36 years, I have been able to justify my field trial expenses as the cost of sanity and an escape from the many pressures that have to be dealt with on a daily basis (if not hourly). You are welcome to use whatever excuse works for you.

Most field trialers have an innate love for our sport and the canines that become a part of our very existence. My first bird dog (Buck) came along when I was ten years old and he taught me a great deal.

My first horse came the same year. In the following 54 years, I have never been without either.

For the most part our equine friends come and go and they are beloved for the task they perform. But, a field trial bird dog is heart and soul. He or she demands our constant attention, because this is a partnership that is welded over time and tested through competition.

This past fall, Angie and I suffered a great loss. Rebel Pride (Jake) missed his evening meal for the first time in his short life (seven and a half years) and succumbed to acute pancreatitis at the vet’s office the next day. He was the best bird dog that I ever blew a whistle over. Not always the best field trial dog, because finding birds was always paramount to running a showy race. His nose and intelligence would carry him to places no other dog would attempt. If birds weren’t easily accessible on a course after about 20 minutes, he would go to wherever they were hiding and that made either finding him pointed or showing him advantageously rather difficult. No amount of heat or cold or wind or cover or briars deterred him from his quest.

One particular memory was when he had nine perfect finds on wild quail at the Region 16 Amateur All-Age Championship on the famed Dixie Plantation near Monticello, Fla., on a course that was short on birds that year. Of course, he didn’t place, but everyone there wanted to take him home. This added up to the joy of victory or the agony of defeat, as Curt Gowdy used to say on the intro to his TV broadcasts, The American Sportsman. “Jake” will be remembered always.

But the future demands that we look to his sons and daughters to stoke the fire of our ambitions.

The AFTCA has been pleased and honored this year with the participation at our National Amateur Championship events. I want to take this opportunity to thank everyone involved in making all of these a success, from the judges and reporters, to the host clubs, to the marshals, and the dog wagon drivers. Especially to the landowners and public land managers, whose efforts are never to be forgotten.

Successful is defined as reasonable entries along with enough fun to make people want to attend again.

Our flagship events have been fortunate to have been held on premier venues and hosted by the best of the best.

The National Amateur Quail Championship was held in March at storied Ames Plantation near Grand Junction, Tenn. It drew 48 dogs with 48 starters in the ninety-minute heats. A special thanks to our judges, Bill Mason and Frank LaNasa, for six days in the saddle.

Dr. Carlisle and his staff were exceptional. Ryan Braddock helped all participants as front marshal and Chris Weatherly took care of back marshal. Dog wagon driver Ken Blackman, photographer Vera Courtney, and Aubrey Green manned the road crossings. Gayle Haynes kept all of us fat and happy. Jean LaNasa kept us all laughing. Every aspect was phenomenal except Mother Nature. Record rainfall had left the area a virtual swamp early in the week.

I apologize to our secretary (Piper Huffman) for not being the help that I should have been during the trial. I was fighting a bout with pneumonia (lost) and that left Piper to wear all the hats. She handled it effortlessly. Along with everything else, she rode every brace to report.

The National Amateur Shooting Dog and Derby Championships were held in February at the Camp Robinson Wildlife Management Area near Conway, Ark. Steve Messick and all his crew did a superb job hosting these stakes. They truly know how to make a field trial a memorable “event”.

The new clubhouse rounds out the exceptional horse barn and kennels. The grounds were as good as I’ve seen them in over 30 years. The judges, Tony King and Tim Penn, evaluated fifty dogs in the Shooting Dog and 23 in the Derby. Tony also donned the reporter’s hat. Funds were raised and fun was had. Piper and I had planned on attending, but our schedules were jammed and we only have regrets.

The National Amateur Free-for-All Championship held in February at the Sedgefields Plantation near Union Springs, Ala., is still on my bucket list to attend. Rumor has it that it is the poster child for field trial fun. Mr. and Mrs. Raymond and Kathryn Harbert are to be thanked for allowing Rick Stallings and his crew to host this prestigious Championship on their exclusive venue. Rick Furney and Pat Varner judged the 88 entries in this year’s renewal. Morgan Brewer was the scribe. A special thank you to everyone who makes this such a memorable event. For me, maybe next year.

Our flagship events would not be complete without embracing our National Amateur Invitational Championships. All the invitees are winners and are to be commended. The format for these three-day events is genius.

After judging five Amateur and two Open Invitational Championships, I have become an ardent supporter. I have been lucky enough to participate in the All-Age a few times and to prove an old adage about a blind sow finding an acorn occasionally. I have a couple of National Amateur gold plaques on my wall. Contestants that can hold everything together for three days are to be held in a different light.

The All-Age Invitational was held in December at the Ames Plantation. This stake has been held there for a number of years, but the welcome mat is always out. Dr. Carlisle and his staff make hosting trials look easy. We can’t thank them enough. Michael Shears and Jonathan Burch presided for the event and Jim Atchison reported.

The Shooting Dog (counterpart) was held again at Round Pond Plantation near Leesburg, Ga. The Walker Family and their staff are to be commended for their gracious hospitality and the use of their incomparable venue. Luke Eisenhart and Rick Furney (filling in for Mark McLean at the last minute) were the esteemed judges. Piper was able to attend and report. We thank them all for their time and expertise.

The AFTCA would like to thank all the other host clubs for their efforts to bring a National Amateur Championship to a venue near you. One of our principal responsibilities at the AFTCA is to provide our members the opportunity to compete in the best National Amateur Championship field trials that are possible. That includes competing on beautiful and exclusive venues that otherwise would be inaccessible to the average field trialer. Please don’t take these venues for granted. Treat them like the gems that they are and show their owners and staff the gratitude they deserve. None of these Championships occur in a vacuum and require a great deal of effort from a lot of people to succeed. The AFTCA invites and encourages you to be involved in as many as you can. The planning for next year’s National Amateur Championships is already underway.

Be aware of our sponsors and support them as they so generously support us.

I would be remiss without thanking AFTCA Secretary Piper Huffman for her efforts and support. Her devotion to this organization and our sport is unequaled. Being our only compensated employee demands that she wear many hats.

In closing, please attend and participate in the various field trial meetings that will be occurring in your area this summer. Attend with a fresh outlook and new ideas to make our upcoming season better than the last. Extend an invitation to someone who might be interested in our beloved sport. Be a mentor to a younger prospective field trialer.

Contact your Region trustee with new ideas or for his. We need to all work together for the AFTCA and this sport to celebrate its next 100 years.

Lastly, plan on attending the Purina Awards on June 22-23 in St. Louis. The AFTCA will hold its annual meetings in conjunction with the many Purina Awards.

Look forward to having a good time and seeing you there.